I’ve said this before, but I’ll say it again. I’m a paranoid mom! When it comes to my son, I worry about everything, especially when he gets sick. I’ll do everything in my power to keep him from getting ill.

Aside from taking him to his pediatrician for his vaccinations and giving him multivitamin, I always remind him to wash his hands well when his hands are dirty because that’s one way to prevent him from getting germs that can make him sick. I’m also glad that in his school, kids are made to wash their hands after doing artwork and before having their snacks.

When I heard about the Safeguard hand washing campaign from Earth, I volunteered to write a post about it because aside from being a long-time Safeguard user, I’m also an advocate of frequent hand washing.

Germs are everywhere– in schools, in churches, in malls, and even in our homes. We all know, too, that germs can cause diseases and children are the ones easily affected when contagious diseases, like colds, cough and flu, spread. That’s because children’s immune systems are not as strong as adults’, which make them the primary victims of disease-causing germs.

We can put a stop to the continuous attack of germs on children through frequent and proper hand washing. This, however, is easier said than done. While many people know the benefits of hand washing, only a few actually take the time to do it. In fact, a lot of people believe that covering their mouths with a tissue is enough to stop the spread of germs. Many are not aware that the only way to stop germs is by killing them. 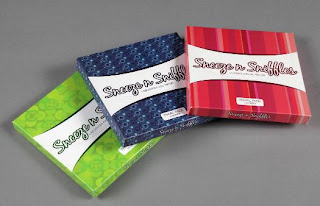 Sneeze and Sniffles look like ordinary boxes of tissue that once opened reveal faces of different kids printed on each tissue. Below each kid’s face is a caption that reads: “This won’t stop germs from reaching him/her.” Sneeze n Sniffles have been distributed to different people at different places for free since December; the dissemination of these boxes will continue until the end of this month. 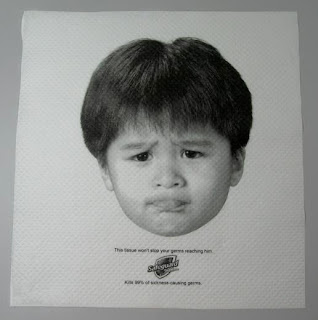 The aim of this campaign is to persuade more and more Filipinos to make hand washing a national habit so that Filipino children are spared from germs and diseases.

We surely don’t want our children to get sick, and we can prevent that from happening by simply washing our hands. The choice is ours to make: Will it be tissue or hand soap?