This picture was taken last Thursday, February 3 before Justin went to school. They were celebrating Chinese New Year in school and the kids were asked to wear Chinese costumes. His old Chinese suit doesn’t fit anymore. We couldn’t find anything for him to wear on this day at Robinsons Galleria. The night before Thursday (talk about last-minute preparation! LOL!), I called up his Dad and asked him to look for a Chinese outfit for our son at SM Megamall, which is very near his office. 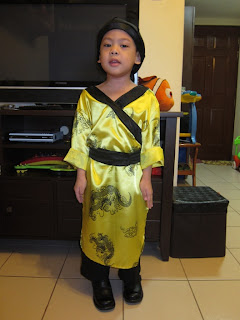 Luckily, hubby found this one. As you can see, the robe is still too big for our son. We improvised a bit because instead of the pants that went with this robe, which is way too long, we made him use his old black slack pants, so he could still move freely while in school. This costume also came with a Chinese hat with long braided hair. The hair, however, isn’t visible in this picture, sorry, folks! And oh, did you notice, his hands are ready for Kung Fu fighting?

Anyways, there used to be an area rug on the spot where this picture was taken. We had it removed because when Justin was just two years old, he would crawl on that rug and would develop skin rashes afterwards. Gee, he’s got sensitive skin just like mommy, but that’s a different story!

So there, that’s the story of my Kung Fu kid.