We were able to watch RPG Metanoia at Robinsons Galleria last December 30, 2010. RPG Metanoia is the Philippine’s first full-length 3D animated film, and it is an official entry to the 2010 Metro Manila Film Festival. This movie is a joint production of Star Cinema, AmbientMedia and Thaumatrope. 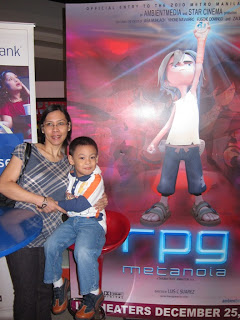 Synopsis of the Movie:

The story revolves around an 11-year-old boy named Nico who is an avid online gamer. In reality, Nico has low self-esteem and he only gets his guts from playing the MMORPG (Massively Multi-players Online Role Playing Game) called Metanoia. He becomes a totally different person when he plays Metanoia: fast, agile and armed with a magic yoyo.

One day, the Metanoia network becomes infected with a virus that affects not only the whole Internet but most computers/servers and the minds of Metanoia gamers worldwide. Nico, his friends and the non-infected players had to stop the virus from dominating the online and offline world. This is where Nico gets to unleash the hero in him.

Aside from the world-class quality of this 3D animated movie that makes me really proud to be a Filipino, this film also encourages the youth to go out and play taguan (hide-and-seek), patintero, tumbang preso, etc. with friends rather than stay glued to the computer screen all day playing online games. The movie also highlights the importance of teamwork, camaraderie and family. Most importantly, it teaches a person to believe in his/her own talents and abilities and to feel good about oneself.

We really enjoyed the movie! Our little boy intently watched the film too. He was able to relate to the movie because like Nico, my son also plays online games. I think that’s what makes the movie interesting for him.

Incidentally, RPG Metanoia is rated General Patronage by the Movie and Television Review and Classification Board and graded A by the Cinema Evaluation Board.