My son craved for chocolate ice cream last Friday after he’s had his hair cut, and we decided to try Caramia Gelateria at Robinsons Galleria. I bought him a scoop of Cioccolato, which cost Php75.00, and I bought a slice of Banana Blast for me. 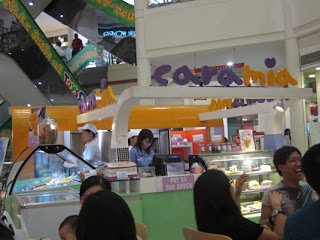 I’m not really fond of sweets, so I never thought I’d finish the entire slice, but I did, and I wanted more! If not for my son who was raring to go home after he’s had his fill of chocolate ice cream, I would have ordered another slice of this delicious gelato cake. 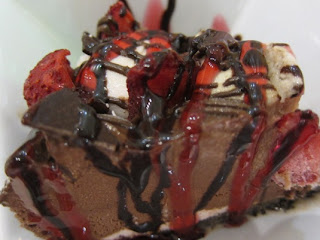 Banana Blast, Php95.00/$2.00 per slice
Banana Blast is Banana, Strawberry Supreme and Cioccolato gelato with chocolate cookies crust. I love the taste of banana and chocolate on my mouth while munching on big chunks of frozen strawberries! Because I like it so much, I asked hubby to buy me another slice last Sunday. The entire cake costs Php600.00, but you can have a slice for only Php95.00.

Incidentally, did you know that gelato is made with more milk but lesser fat? This means gelato is not only richer and creamier, but it’s also healthier than ice cream.