Scared at the Mall

My son and I took a quick trip to Robinsons Galleria yesterday noon to see Joy Mendiola and give her my Christmas gift, to take my son to the barbershop to have his hair trimmed and to treat my son to Tom’s World; he hasn’t played there in a long while.

On our way to the barbershop, my son stopped dead in his tracks, seemingly afraid of something. He sat on the floor with his left hand touching the ground for support, and I couldn’t make him leave his spot. Nope, there weren’t band saw blades lying on the floor that scared the wits out of him.

He was actually afraid of the glass panels that serve as dividers at the mall. Because the glass panels were transparent, he actually thought there was nothing there, and he was afraid that he might fall down if he gets near these “invisible” glass panels.

I tried to make him touch the glass panels so he could see for himself that there was nothing to be afraid of, but he wouldn’t budge. I had no choice but to proceed to our destination at once, so he could forget about the whole thing.

After he’s had his hair cut, we passed by the same glass panels again. I took the liberty to take pictures of the things he feared and compared it to the ones the mall planned to replace. They’re still not finished changing everything inside the mall. 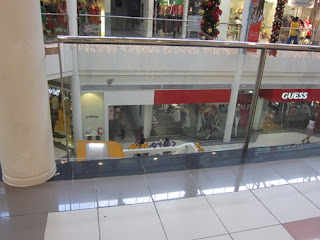 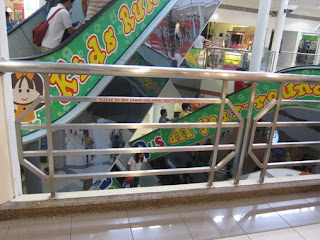 Metal grilles
Now, which do you think is safer for children: the glass panels or the metal grilles?

This entry was posted in Musings, Personal, Robinsons Galleria. Bookmark the permalink.

2 Responses to Scared at the Mall