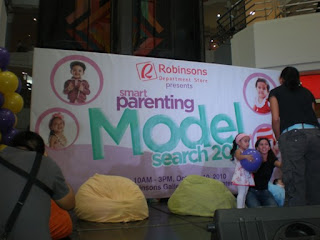 We were at Robinsons Galleria Activity Center yesterday morning for the Smart Parenting Model Search 2010. This contest is open to children aged 0 to 6 years old. I entered my four-year-old son in this competition both for exposure and experience. 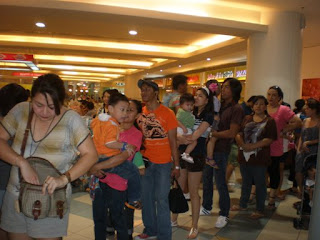 People lining up to register 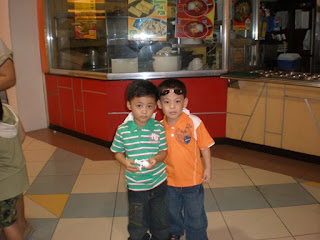 Justin (right) and another contestant
Feeling complacent that Robinsons Galleria was just walking distance from our place, we went there a few minutes before 11am. We were surprised that there was already a long queue of people. We lined up for registration for 2 hours. Tension was already building by noon time because the lines for registration were not orderly. It didn’t help that the kids were also getting cranky.

We were supposed to register our kids, then fill up a form and wait for our numbers to be called. Because there were lots of complaints from parents (moms mostly) in our queue, the organizers had to skip the registration process for us and just gave us the forms instead with our assigned numbers written on top.

They also weren’t able to check our Php500.00 proof of purchase for kids’ tops and bottoms purchased from Robinsons Department Store, which is one of their contest requirements, and they simply dumped our forms and receipts in one corner. I just hope that no receipts get lost in the process that will disqualify some contestants.

According to Michelle of MrsMartinez’ Raves and Rants who was there to cover the event, the organizers were not expecting a lot of contestants to join. They should have anticipated this because they’re holding a nationwide model search.

After two hours of waiting, my son had his photoshoot on stage a few minutes before 1pm. He was Contestant No. 124. He was already a bit restless then. Good thing, Dora appeared on stage, which made him totally forgot what he was whining about. I managed to take a picture of my son while posing for the photographer on stage. 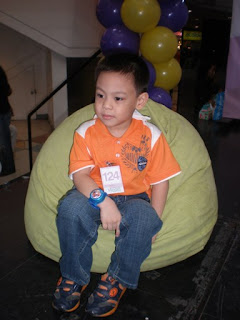 Justin posing on stage
We were tired, thirsty, and hungry when we left. Next time there’s a contest like this, we’ll make sure we’re there early with lots of bottled water to keep us hydrated and a fan to keep us cool. Winners of the Smart Parenting Model Search 2010 will be posted on Smart Parenting’s website.

7 Responses to Our Experience at Smart Parenting Model Search 2010