Justin Reads Train Book on His Own 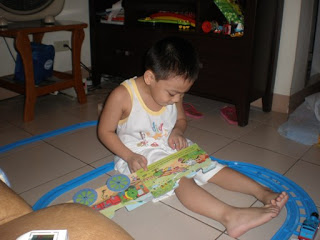 When I was working this afternoon, I heard him reading the book again on his own, and this time around he didn’t ask anyone for help with the words in the book. He read the entire book with ease! Just to make sure, I asked him to read the book to me. True enough, he can read everything. The book has a total of 19 sentences.

Here’s the entire text of the book Train by Jane Brett:

“The train is ready to go. All the passengers climb aboard. Toot! Toot! The driver sounds the whistle. This train is going to the top of the hill. It is a very long way to get there! Can you follow the track?

As the train climbs the hill, the driver puts in more coal. Big puffs of smoke come out of the engine’s smoke stack! Look! Some people are waving as the train goes over a bridge, past a river. Everybody in the train waves back.

Up and up the train goes and passes through a tunnel! On the other side at the next station, more people are waiting to get on. There are walkers, a cyclist and a family who are taking their dog.

Will there be enough room for everyone on the train? When it finally reaches the top, everybody gets off. Can you see where they are going? Now the train is ready to go back down the hill.”

I know they’re being taught sight words in school, but they’re not reading sentences yet. I’m also not sure if his fascination with trains (the book is train-shaped, too!) has encouraged him to learn to read the book by himself. You see, he wasn’t as enthusiastic to read his other books, unlike this one. We also did not force him to read; he did it on his own accord. I bought him another book, a car-shaped book, this time, but he’s still not touching it, and we’re not really pushing him to read it. I guess that’s the best way kids learn. Justin is now 4 years and 2 months old as of this writing.

This entry was posted in Pre-Kindergarten, Reading Milestone, Train Book. Bookmark the permalink.

7 Responses to Justin Reads Train Book on His Own