And My Little Boy Writes Again! 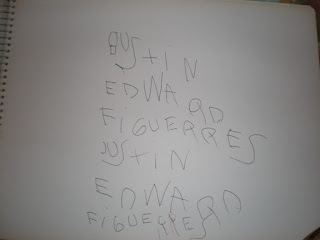 We didn’t force him to write, and they’re still not being taught to write in their Pre-K class. Justin learned to write on his own. As you can see, his strokes are still unpolished. He would write some letters beginning from the tail going up, instead of starting from the top going down. He does the same with some numbers. He can also count up to 100 now. My son has just turned 4 last July 7.

This entry was posted in Milestones, Musings, Personal. Bookmark the permalink.

6 Responses to And My Little Boy Writes Again!