These past few days, Justin would always be asking us for a pen, but not just any pen. He has a specific pen in mind, and he won’t stop bugging us until he gets it. He would only settle for a pen that we give him if he realizes there’s no way his current favorite pen could be found.

The reason he needs a pen is because he wants to write and draw. Those activities are what keep him preoccupied lately. He finished Nursery last March and would be a pre-kindergartner this coming June. In his Nursery class, the kids were not given writing exercises yet, but they were asked to trace their first names on paper every day. 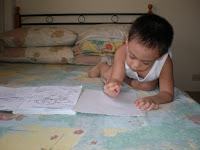 During our last Parent-Teacher Conference in Justin’s school, his teachers told me that Justin is the only student in their class that can write his first name on his own. The rest are guided by teachers. We didn’t teach him to write his name at home. He learned to do it on his own. Because he knew the letters of the alphabet, he started writing them down. One day, he approached me and showed me that could already write his first name.

Last Sunday, when we went to church, he asked his Tita Meann for pen and paper. He lied down on the floor and busied himself writing on the tithing envelope that his Tita Meann gave him. To our surprise, aside from his first name, he also wrote numbers 1 to 10; number 4 was missing, though. He said he didn’t want to write it. This is the first time that he wrote down numbers. We didn’t even know he knew how to do it already, and again, he wrote them without any help from us. 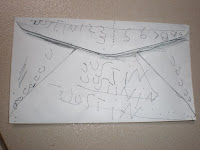 Of course, his handwriting strokes are not polished yet, but this is already a good start. And oh, I forgot to mention that he can draw jellyfishes and Patrick (SpongeBob’s best friend), too. He’s only turning 4 this July.

This entry was posted in Milestones, Musings, Personal. Bookmark the permalink.

3 Responses to My Little Boy Writes