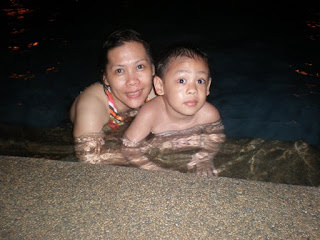 We’re supposed to share in this week’s theme what motherhood means to us. Honestly, I never imagined myself becoming a mother because I thought I was fated to become a spinster. But much to my and everybody else’s amazement, I got married at the tender age of 24. That’s because I thought I had nothing better to do with my life at that time than be a wife.

We didn’t have children right away because I had hormonal imbalance, which was later discovered to be caused by a tumor in my pituitary gland. This pituitary growth suppressed my fertility. When part of that tumor was removed in 2004 and the rest was treated by medication, everything went back to normal, and I got pregnant in 2005.

We never thought we’d have a baby, and when we finally had one, I wasn’t sure how to go about being a mom. I was totally unprepared for it. Being a mother was painful (I delivered via cesarean section), it was tiring at its initial stages (it still is!), but it’s also the most fulfilling experience I’ve ever had. So if you’re going to ask me what motherhood means to me, I would sum it all up in two words: sacrifice and reward.

Motherhood is the ultimate sacrifice. Because you’re the child’s mom, you’re expected to do all of these things: give your baby a bath, feed him, care for him, take him to his pediatrician for his vaccinations or when he is sick, attend to his school activities, etc. You’re not excused from performing these motherly duties even if you’re also working. You now have to put your baby’s needs first before your own because he is totally dependent on you.

Motherhood is life’s greatest reward. Motherhood is God’s special gift. Not every woman is meant to become a mother, though, and I consider myself fortunate that God has made me one. I earnestly await my son’s hugs, kisses, and his whispers (or shouts) of I love you every day, and I now look forward to a lot of things that we will do together as a family. Motherhood has made my life more meaningful.

This entry was posted in Mommy Moments, Motherhood. Bookmark the permalink.