Justin’s five-week summer class officially ended last May 7, 2010. We have two reasons why we enrolled him in summer class. First, we want him to be doing something productive while on vacation. You see, he gets pretty bored at home, and I can’t blame him as living in a one-bedroom condo unit doesn’t offer much space for kiddie adventure and exploration. Although kids here can frolic in the building playground, he doesn’t really like going there these days. Another reason for enrolling him in summer class is to provide continuity from his Nursery class which ended last March to his Pre-Kindergarten class which begins this June. This way, when school opens next month, he wouldn’t feel uncomfortable in the company of his new teachers and classmates. 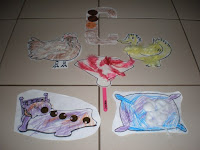 Some of Justin’s summer class artworks

This entry was posted in Artworks, Summer Class. Bookmark the permalink.

3 Responses to Done with Summer Class