A Trip to Jerusalem Expert

If there’s one parlor game that our almost 4-year-old son Justin is getting good at, that would be Trip to Jerusalem. The more popular term for this game is Musical Chairs. It is a game consisting of players and chairs. The number of chairs is one fewer than the number of players. If you have 8 players, for example, you should have 7 chairs.

The chairs are arranged in a circle facing outward, and the players have to walk (or dance) around the chairs while the music is playing. When the music stops, everyone scrambles to sit down in the chairs. The player who is left without a chair is eliminated from the game. Another chair is then removed to conform to the rule of one fewer chair than there are players. The cycle is repeated until there’s only one player left who is declared as the winner.

In my previous post about our summer escapade at Canyon Cove Residential Beach Resort last Saturday and Sunday (April 10 and 11), the organizers of the event, my husband’s friends and officemates, thought of having this parlor game for the kids because the little ones were getting impatient. Check-in time at the resort was 3pm, but we were there very early; that’s the reason why the kids were getting restless.

At first, Justin didn’t want to join, but because all the kids were joining and there were prizes at stake for the winner, he was persuaded to participate. I think he’s the youngest participant, but he almost won the game. He lost to a much older and bigger boy. He received a consolation prize, a toy, which only lasted a few hours; don’t ask me why. My son is the one wearing green striped polo shirt and cargo shorts. 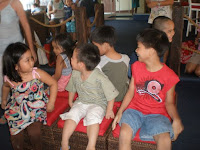 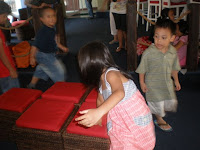 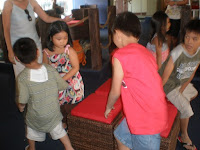 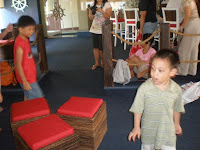 So, what do you think? How many more Trip to Jerusalem games does my son need to join to become a winner?