It was my husband who pointed out that Mr. Fu lived in the same condo as we. Because I haven’t been listening to the radio or watching TV that much, I really had no idea who Mr. Fu is. The first time I listened to his radio program Hi Pangga at 91.5 Energy FM was when we were riding a taxi going to Makati Med for my son’s (or is it hubby’s?) checkup. That was how I also became familiar with his famous tagline: “Me ganon!”

We have met him in the hallway and have ridden in the same elevator with him quite a number of times already. That’s because we’re just a few condo units away from where he lives. I like the fact that he’s very warm and friendly. He would always smile at us whenever we see him. He would often converse with our son, too.

Just when we were about to get inside our unit after we attended the Bisolvon Supermoms Blog Event last Saturday, we saw Mr. Fu in the hallway. By this time, my son already knows his tagline, too.

Mommy: Justin, there’s Mr. Fu. What will you tell him?

Mr. Fu: Hi! Ay, wait! I have something for you. (He went inside his unit to get something. When he went back, he had a Toblerone bar for Justin.)

Mommy: What will you say, baby?

Mommy: Mr. Fu, is it okay if I take a picture of you with my son? 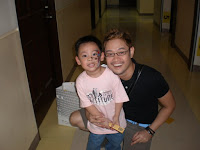 Because he’s so accommodating, I became an instant fan.

This entry was posted in Mr. Fu, Musings, Personal. Bookmark the permalink.