Kids, like adults, have bad days, moments where they display ill temper, anger, or frustration. When Justin was just a baby, he would have tantrums when the adults around him would not understand what it was he’s crying about. When he started talking (he talks well for his age, by the way), he had lesser tantrums because he could already express what he wanted. Now that he’s three years old, his tantrums are more an expression of frustration, such as when he doesn’t get what he wants because Mommy and Daddy forbids it or when he’s put in timeout, like the photo below. He hates timeouts because he knows he’s being punished for something he did wrong. 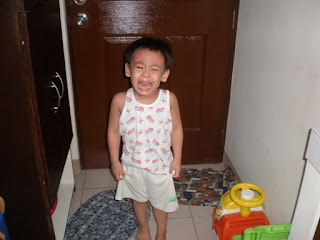 We made him stand by the door for 3 minutes after he misbehaved. He looks totally disheveled here.

This entry was posted in Mommy Moments, Tantrums. Bookmark the permalink.