Do I Look Chinese?

Justin’s school celebrated United Nations Day early (October 16) because they’ll be having their midyear break in the last week of October. That means they’re also celebrating Halloween earlier (October 23). The students are supposed to have two costumes for both events. However, because of the recent typhoons that crippled many of our kababayans in the past weeks, the school administrators decided one costume is enough for both occasions.

Luckily for Justin, he has a Chinese suit at home that he can use during their United Nations Day celebration. It was the same Chinese suit that he wore on his second birthday. Of course, I took a picture of him wearing the same costume, and I was amazed at how my son has grown from an innocent-looking two-year-old tot to a naughty-looking (but still cute and adorable) three-year-old boy. 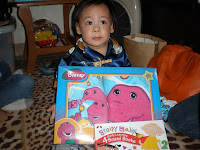 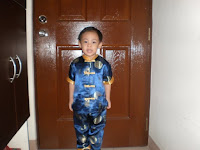 My three-year-old young man
Do you think he looks Chinese?

5 Responses to Do I Look Chinese?