My Little Boy Is Sick

Justin was absent from school last Thursday and Friday because of persistent cough. I had already taken him to his pediatrician and he was given antibiotic and cough medicine. The doctor advised us to nebulize him, too, not because he is asthmatic but to shorten the duration of the cough. 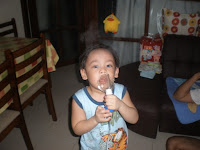 Justin nebulizing
I woke up at 3am yesterday because my son who sleeps between me and my husband could not sleep. I put my arm around him to help him fall asleep but I realized he was shaking. I immediately gathered him up in my arms, made him lie on my tummy, and embraced him tightly, but he was still having chills. His temperature was okay when I checked it.

After the chills subsided, that’s when he developed fever. I gave him an antipyretic and monitored his temperature for the next three hours. He was okay by 6am, and we went to his doctor again. The doctor said there might be other virus in his system that needs to be flushed out, so another antibiotic was given which he would take for 3 days together with the medications earlier prescribed. I hope he gets well soon. Seeing him sick is making me crazy.

This entry was posted in Health, Motherhood, Personal, Toddlers. Bookmark the permalink.

3 Responses to My Little Boy Is Sick