I don’t have a picture of my son taken while he’s walking in the rain because, well, that’s hard to do, right? I took a picture of him instead with his raincoat on. He dons this raincoat whenever he goes to school on a rainy day. 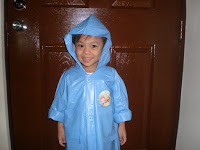 One time when I had a planned trip to the mall and it’s raining, my son insisted and begged that I take him with me. Because it’s raining and it’s difficult to carry an umbrella and care for a hyperactive boy at the same time, I just made him wear his red jacket with hood so he won’t get wet. 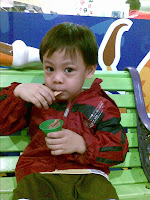 This picture was taken immediately after we braved the rain to go to the mall. (Note: The jacket’s hood was not captured in photo because we’re already inside the mall.) He actually wanted to have a taste of his favorite Milo soft-serve; that’s what he’s eating on this cold rainy day.

Click on the badge above for more rain-related stories and photos.

This entry was posted in Mommy Moments, Rainy Day. Bookmark the permalink.