Awarding of Winners of You’re the 1, Goldilocks Contest

I attended my first bloggers’ event yesterday for the revelation of winners of the You’re the 1, Goldilocks contest. The event was held at Topshelf, Fully Booked High Street, Bonifacio Global City, Taguig City. The program was hosted by Juddha Paolo and was graced by none other than the hunky Goldilocks endorser, Dingdong Dantes. 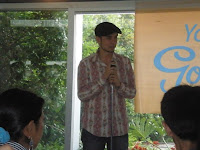 My sister Meann and I were one of the early birds, and we were given a basketful (or plasticful) of Goldilocks treats and a bag full of Summit Media magazines. Each blogger was also given a Goldilocks cake to decorate for the do-it-yourself contest. There were also trivia games and food. I loved their laing pasta! Bloggers and their companions also had a grand time at the photo booth; they had their pictures taken with props if they want to, which they get to keep as souvenirs, and that’s free! 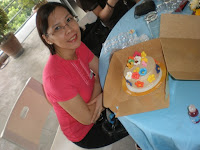 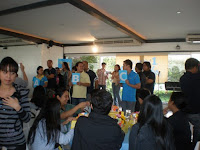 Goldilocks gave away an additional set of prizes for all participants. Originally, they meant to give away one ASUS F80Q laptop and three (3) HP Minis, but because they received so many entries, 130 (or is it 140?), they decided to give away two more HP Minis and four consolation prizes of Goldilocks gift certificates worth Php2,500.00 each.

I did not win any of those prizes, but I felt like a winner simply because of the photo opportunity I had with Dingdong. 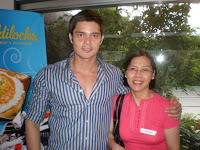 The second place winner was Mauie Flores of The 24-Hour Mommy. Here’s her winning entry. And the grand prize winner was Ms. Noemi Dado of A Filipina Mom Blogger. Congratulations, Mauie and Ms. Noemi! I’m sorry I failed to get the names of the other winners, but congratulations to all of you, too. You all deserved to win.

I’m so looking forward to another contest from Nuffnang and my next bloggers’ event.

P.S. I finally met Pehpot of Make or Break at last night’s event. We did not have that chance to talk much, but it was enough introduction for the two of us. I hope to see her again wherever.

This entry was posted in Contest Winners, Goldilocks, Nuffnang. Bookmark the permalink.

17 Responses to Awarding of Winners of You’re the 1, Goldilocks Contest