Just in case I won’t have Internet connection for the rest of the day and until tomorrow, I’m posting my entry now using my phone as modem while I still have cell phone load.

Because Justin enjoyed his five-week summer class and he’s the right age, we enrolled him in nursery for this school year. Classes in their school officially started last June 17, and I say I’m one excited mom! I made my mornings less hectic so I can accompany him to and from school, which is very near our place, by the way.

He’s just been attending class for a week now because classes for preschool were suspended yesterday and today due to typhoon Feria. He’s actually getting bored just staying in the house and playing. I really think he missed school.

Justin is still quite clingy, but last Tuesday, I left his classroom to be with the other parents waiting at the lounge for their children. He cried a little, but he soon forgot about mommy as soon as I was out of his sight. He was even grinning widely when their class was dismissed. “Did you cry?” I asked him. “No,” he said, but he did.

He still actively participates in all their classroom activities, but I noticed he gets distracted and a little bit bored sometimes probably because they now have a three-hour class as against their two-hour summer class last May. He’s gotten a little bit more complacent, too, that he sometimes doesn’t listen to his teachers (two teachers are assigned per classroom) like when he’s asked to lie down on the mat during rest time. He doesn’t want to rest; he wants to play after recess. 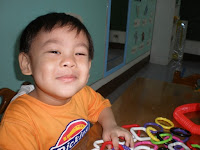 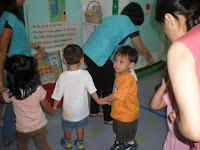 Justin doing “Ring around the Rosie” with his classmates 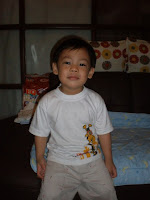 Justin proudly wearing his school shirt
Click on the badge above to see more School Days stories and photos.

This entry was posted in Mommy Moments, Nursery, School. Bookmark the permalink.