Justin’s five-week summer class officially ended last Friday, May 15. Because Justin never missed a single day of school, never pooped in school, and gamely participated in their classroom activities, his Dad thought of rewarding him with toys.

Justin already owns a Thomas tank engine, but he wants to have the other tank engines as well. They’re quite expensive, so his Dad thought of buying him miniature tank engines so he can have three, instead of just one regular-sized tank engine. 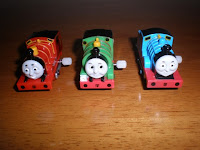 Justin is also very fond of cars, and though he already has quite a number in his toy box, he simply can’t get enough of them, so again, his Dad gave in to his son’s wishes and bought him this set of race cars. 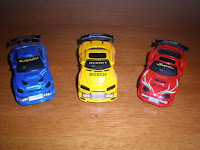 Justin had a blast playing with his new toys at home. Last night, he went to bed way past his bedtime because he still wanted to play.

How about you? How do you reward your kids?

This entry was posted in Good Deeds, Rewards. Bookmark the permalink.

9 Responses to Rewards for Good Deeds