I’ve posted my entry early just in case I won’t be able to use our PC tonight.

Justin had his first two haircuts done at different kid’s hair salons to make these a fun time for him. His first haircut was traumatic for him, though, as he cried the whole time his head was being shaved. That was done when he was only 1 year old. We failed to take a shot of the actual haircutting, but this was how he looked like afterwards. 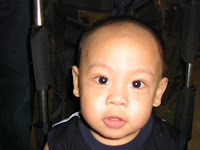 Justin’s second haircut happened when he was 2 years and 4 months old in preparation for a playmate’s birthday party that he was going to attend the next day. While he was still hesitant to let the barber touch his hair, he was more cooperative this time around. 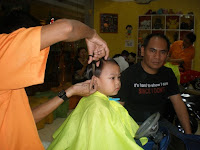 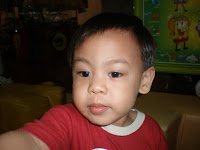 After
These days, I only bring Justin to the hair salon at the lobby of our condo where I also have my hair done. It’s more convenient for us, and it’s a lot cheaper than kid’s hair salons.

This entry was posted in Baby, Haircut, Mommy Moments. Bookmark the permalink.