Last week, Justin’s teachers in his nursery summer class advised all parents that starting today, Monday, we should all just be waiting outside the classroom for our children. I intended to follow that instruction and had previously briefed Justin on what he needs to do while mommy is outside.

Did I do that, you might ask? Because there were still some parents inside and the teachers weren’t really driving us out of the room–well, not just yet–I decided to stay inside the classroom but kept my distance.

I decided not to follow Justin around the classroom while he played, but I was quick to remind him not to grab other kids’ toys and to say “borrow” if he really wanted to get hold of the toy that another kid is playing.

By now, Justin is already accustomed to the daily two-hour routine: play, action songs, storytelling, coloring, mealtime prayer, eating time, rest time, storytelling, action songs. Justin is most animated, however, when he plays and when he sings and dances. He actually loves dancing to the tune of “La Bamba” and even performs it at home. 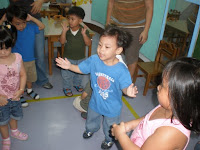 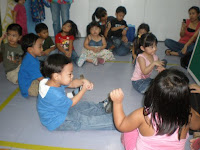 He’s getting a little bit bored with the storytelling part as his teachers keep reading the same story twice every day. The good thing about it is that he has already learned all the animals in that story and is even narrating the same story (his own version) at home.

Tomorrow, I will sneak out of the classroom to see how Justin will behave.

This entry was posted in Summer Class. Bookmark the permalink.