Yesterday afternoon, hubby, I and Justin trooped to Dentista, Inc. at Shangri-La Plaza Mall for our dental appointments. It was Justin’s first dental visit. I recently discovered two of his milk teeth are beginning to show signs of dental caries.

Justin was fidgeting while waiting for his turn to be checked. He was actually on the verge of tears and was asking us to leave the clinic at once, saying “Ayaw na dentist” (I don’t like the dentist). He only stopped when he saw other children enter the clinic. We told him he shouldn’t be crying because the other kids were not. 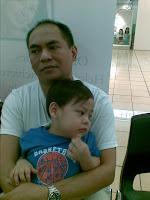 Justin with Daddy at the Dentista, Inc.’s waiting area

When Justin’s name was called, he was warmly greeted by the pediatric dentist to make him feel at ease. But he began crying and couldn’t be stopped. So the dentist asked me to be the one to sit on the dental chair and to place Justin on my lap instead.

Dr. D. counted Justin’s milk teeth and noted those that needed to be fixed. She said two needed dental filling and one tooth is starting to show signs of demineralization. She started cleaning Justin’s teeth with cotton afterwards and then painted his teeth with fluoride varnish. Too bad, Justin’s dad wasn’t able to take pictures of Justin when all of these were being done.

Dr. D. said those were the only things she would do. The fixing of the two teeth will have to be performed some other time because the goal yesterday was to familiarize Justin with the dental setup, make him accustomed to having a dentist examine his teeth and make his first dental visit a pleasant experience.

The whole procedure took less than 30 minutes. As a reward, Justin received an orange balloon from Dr. D. I asked Dr. D. if we could have a photo opp with her and told her I would blog about yesterday’s event and she gladly conceded. We’ll be back in her clinic after two weeks. 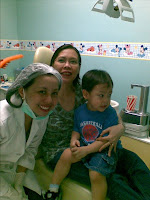 Dr. D. with Mommy and Justin 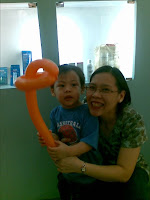 This entry was posted in Baby, Family, Health. Bookmark the permalink.