These were the first words my two-year-and-five-month-old son Justin uttered when he woke up from his afternoon nap today.

Since my work for December ended on the 20th, I spend less time on the computer these days. The only time I get to use the PC is when my son Justin is asleep.

My son now takes my place in front of the computer watching Thomas & Friends YouTube videos. This is because he only has a handful of Thomas & Friends DVDs (only three, in fact, but he accidentally broke one, leaving him with only two now). He usually spends three to four hours a day video-hopping. 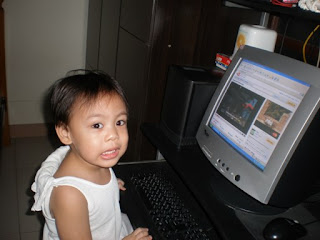 I know, I know. He’s not supposed to be watching too much. But what’s a mom to do?

This entry was posted in Baby, Milestones, Motherhood, Parenting, Recreation. Bookmark the permalink.