True to my promise, I have never attempted to cut my son’s hair again since the October 12, 2008 incident (Read my “Panic 101”post.) Yesterday afternoon, we went to Kid’s Hair Salon to have Justin’s hair clipped by an expert. This is his second time to have his hair cut in a salon. The first time was when he was one year old. That wasn’t a very pleasant experience for my son. He cried all the time his head was being shaved. You heard it right. We had his head shaved because Justin had very thin hair at that time. Who was it that said that this is one strategy to make one’s hair thicker? It didn’t work wonders for my son. His hair remained exactly the way it is.

Since his first “formal” haircut was done over a year ago, we never knew what to expect of our son this time around. Would he behave the same way, or will he be more mature this time? At first, he was afraid. But the small TV screen in front of him and the kiddie car he’s riding while in front of the mirror caught his attention. Those, coupled with encouraging words from mommy and daddy and the barber, made the entire process uneventful. 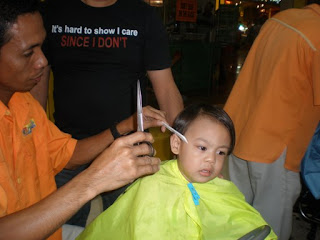 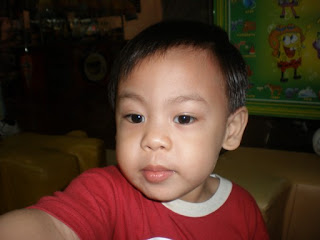 I actually wanted Justin’s hair trimmed in preparation for this afternoon’s celebration. Justin is attending a playmate’s birthday party; that’s why. It’s his first time to attend another kid’s birthday fete. So, mommy is really excited! And mommy has to be sure her son is looking his best.

This entry was posted in Baby, Haircut. Bookmark the permalink.

One Response to Justin’s New Haircut