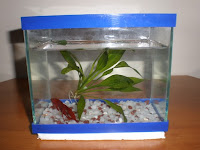 Justin’s daddy texted me this afternoon to ask if he could buy Justin a pair of hamsters. I wasn’t really too keen on the idea, so I asked Justin’s pediatrician (Dr. O.) and substitute pediatrician (Dr. D.). Dr. O. said hamsters might bite Justin. Besides, they multiply fast. Gosh! That might pose a problem later on. Dr. D. also advised against it for fear that Justin might catch an allergy from the animals’ fur. She added that Justin’s still too young to be having pets. Ergo, the thought of buying hamsters was foregone in favor of a fish, which was actually suggested by Dr. O.

Justin was all smiles when he saw his daddy holding an aquarium with a small, red fish inside. He even said, “Hi, Fish!” His daddy gave him pellets to feed the fish, and he was too excited to do as he was told. He joyfully watched as the fish ate and spat one of the pellets, and he found that funny. At one point, he hugged the tiny aquarium and said, “I love you.” After Justin’s already had his fill of his new pet, his dad finally placed the aquarium on a high shelf in our living room.

This entry was posted in Baby. Bookmark the permalink.

One Response to Justin’s First Pet