Last Sunday afternoon, Justin, mommy, and his nanny went to Pizza Hut to attend his playmate’s (Gabbie’s) birthday party. I met Gabbie’s mommy in our building gym one time, and that’s how we came to know each other. Justin bumped into Gabbie at the playground twice already. Gabbie is now three years old.

Justin particularly enjoyed the spaghetti and ice cream. He actually ate more than one plate of spaghetti. Good thing there was an extra plate served in our table. He didn’t participate in the parlor games, however, because he was too young to understand the mechanics of the games. He would be with the other kids at the start of the games, but he would leave immediately after the game had started. He had better things to do, like use the crayons in the loot bag that he received from Gabbie’s mommy.

Justin happily participated in the singing of the Birthday Song for Gabbie, though, and counted 1 to 10 with the rest of the kids to signal the arrival of Pizza Hut’s mascot, Pizza Pooch. He wanted to blow Gabbie’s birthday candle, too, and one of Pizza Hut’s crew was kind enough to let him do it. She lit the birthday candle again and made Justin blow it, all the while thinking it’s his birthday, too. Below are some pictures from the party. 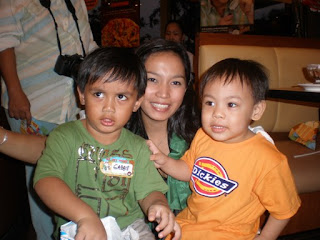 Gabbie with his mommy Rochelle and Justin 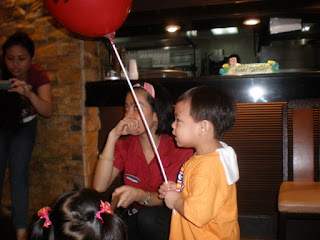 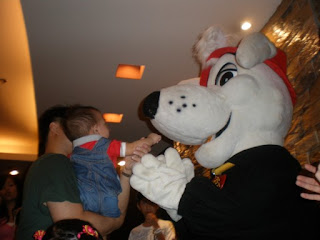 This entry was posted in Birthdays. Bookmark the permalink.