There are a number of things that my son Justin took after his daddy. One of those is his fondness for watching TV and VCDs/DVDs. In fact, the only time the TV set in our living room is off is when Justin is taking his afternoon nap at the sofa bed. Otherwise, it’s on the whole day.

That’s the same with his dad. When he’s not in front of the computer playing chess or watching an international chess tournament, you’ll find him in front of the TV watching his favorite shows or a VCD/DVD of a film he already watched before or he’s yet to see. To date, Justin’s daddy already has around 300 original VCDs. He started collecting when we got married. DVDs are quite expensive, so he only had a few originals. He actually had wooden shelves installed in our living room wall to house his growing collection. 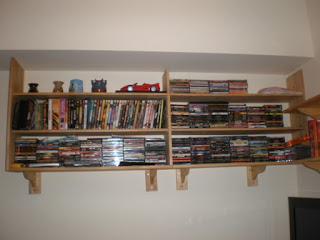 Justin’s daddy already started buying his son his own DVDs. (Note: There are DVDs for kids that are selling at Php100.00 in selected stores.) Justin’s own VCD/DVD library consists of a few Barneys, 3 Blues Clues, 3 Thomas & Friends, 2 Dora the Explorer, 2 Brainy Baby, 1 Bob the Builder, 1 Bee Smart Baby Vocabulary Builder, and 1 Brilliant Baby Collection. Justin’s daddy did not buy all of these, however. Some are gifts from friends. I now wonder what part of our living room wall will be for Justin’s own collection.

This entry was posted in Family, Movies, Parenting, Shows. Bookmark the permalink.